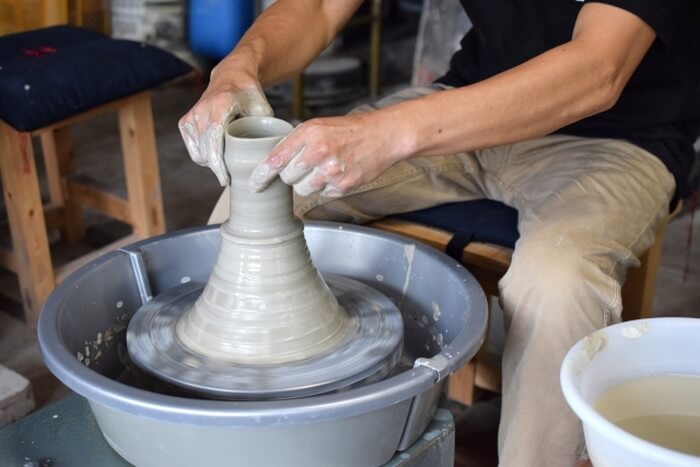 Today, many countries have the technology to produce ceramics. Among them, Japanese ceramics are favored by users around the world.

The birth of Chinese ceramics dates back to nearly 10,000 years ago. Earthenware was one of the first ceramics styles, followed by a swift evolution that included white porcelain, elegant copper and iron underglaze, and blue and white designs. The changing dynasties had the biggest influence on the ceramic trend of the time.

Japan's first pottery also dates back nearly 10,000 years ago in the Jomon Period, producing mostly stone and earthenware. During this time, pottery was baked with a large bonfire. When the kiln and other modern firing techniques were developed, different cities and towns started adopting their unique pottery techniques. Today, more than 50 cities and towns have their pottery styles.

The types of ceramics can be distinguished according to hardness, density, water absorbency, glaze, and other conditions and are broadly divided into ceramic and porcelain. However, there are significant differences in the classification criteria for ceramics and porcelain from country to country. 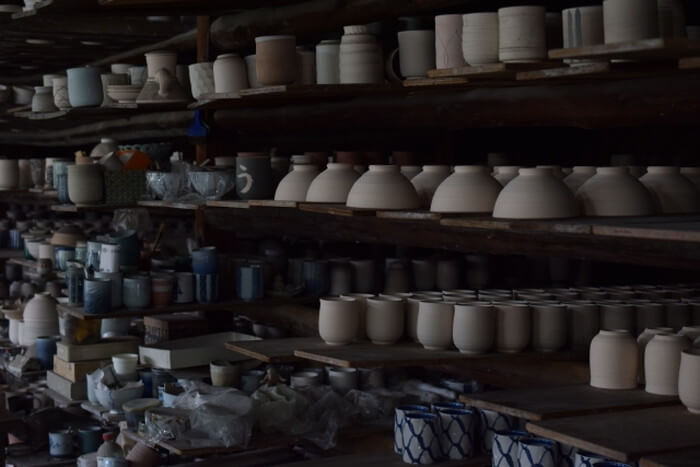 Porcelain is made of clay with high alumina content (Elderly soil). The firing temperature is at least 1300°C. Clay becomes porcelain after firing. Porosity and water absorption rate are low. Most of the porcelain produced in Japan is made of Amakusa pottery stone from Kumamoto Prefecture. 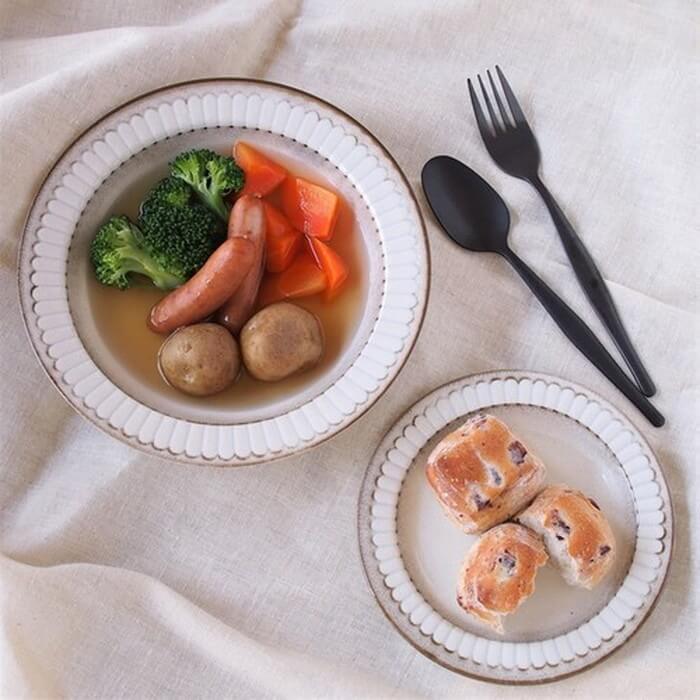 One of the original forms of Mino ware was created with potter's wheels and cedar kilns. Over time, this evolved, with modern firing techniques and Japanese tea ceremony culture influencing the different emerging styles. Three prominent styles of Mino ware are Oribe, Shino, and Kizeto. Today, it is common to see a wide variety of glazes, colors, and patterns on different Mino ware styles. Overall, Mino ware represents the majority of ceramic production in Japan, offering a classic aesthetic. 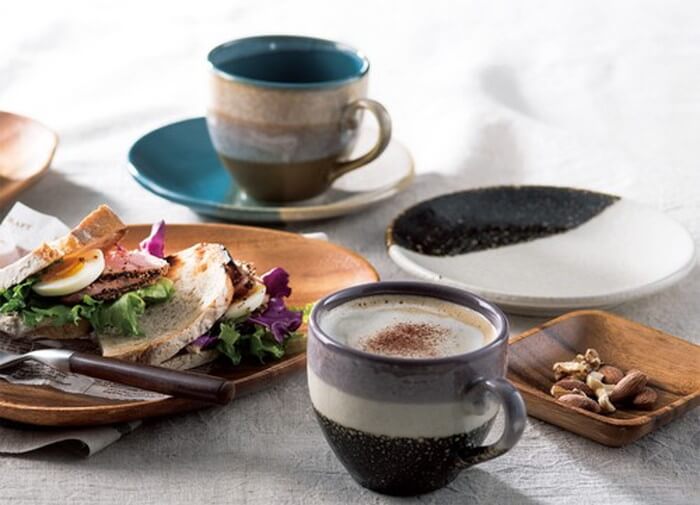 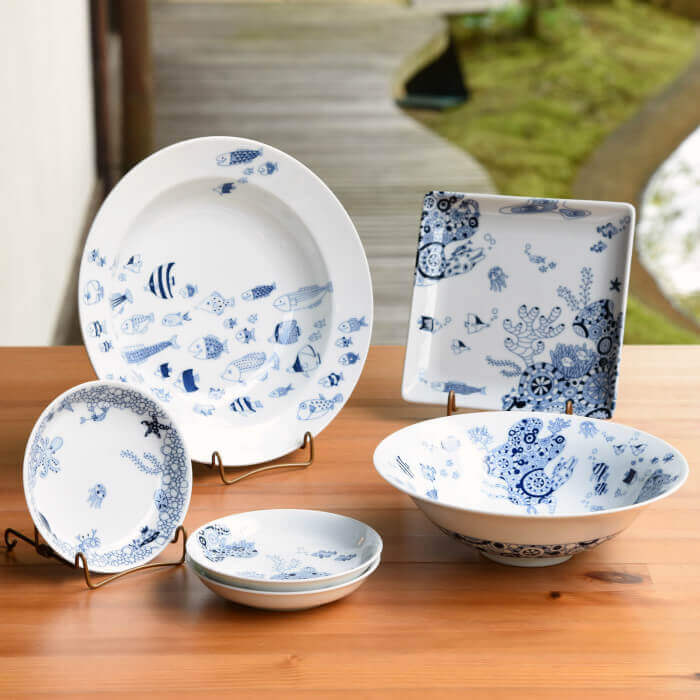 Hasami ware, also known as Hasami yaki, is a Japanese porcelain style native to Hasami (Nagasaki prefecture). This traditional ceramic craft is most known for its timeless white and blue aesthetic. A semi-transparent indigo blue (gosu) porcelain is used to decorate over white porcelain, creating the iconic porcelain style that gained popularity as a sake and soy bottle design.

Originating in 1598, during the Sengoku period, the very first Hasami ware pieces were baked using an "ascending kiln", or a hole dug out on a hill. One of the most popular modern-day Hasami ware is the kurawanka bowl, which became a hot commodity during the Edo period (1603-1868). Hasami ware continues to be one of the most prominent Japanese ceramics styles today.

The Beauty of Hasami Ware 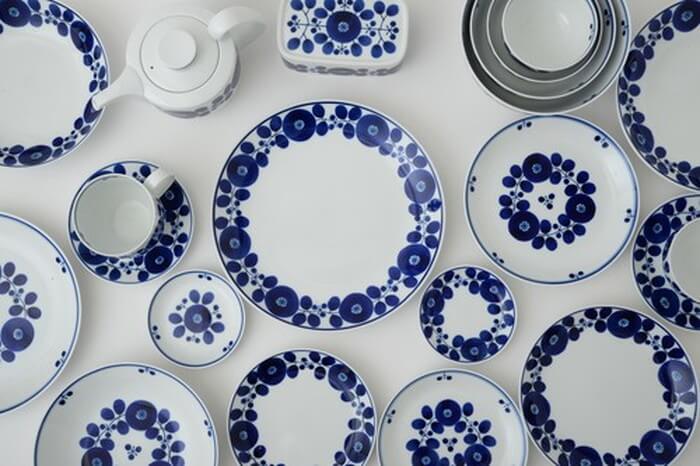 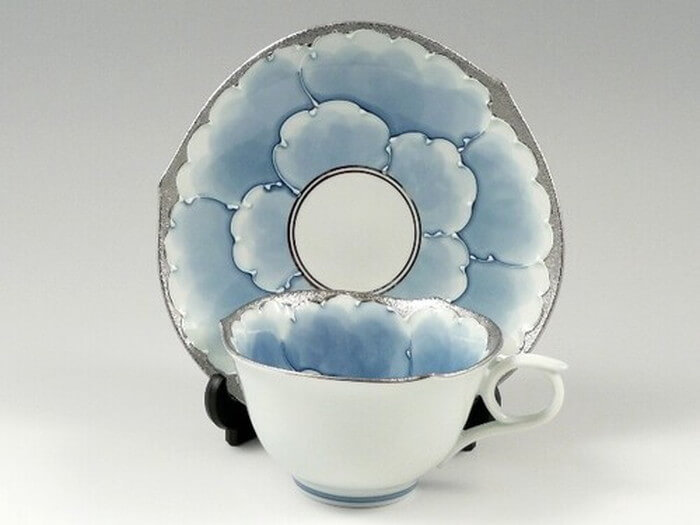 As early as the 1600s, Arita ware was being produced in Arita (Hizen Prefecture), where Korean potters and traditional Chinese ceramic styles influenced the very first porcelain in the region. The high-quality porcelain clay from the Izumiyama clay mine had a big influence on Arita ware's sudden evolution.

In the latter part of the 17th century, the very first colored ceramic overglaze was introduced to Japan from China, creating a significant ripple in traditional white ceramic Arita ware design. The Japanese ceramic style quickly became known for its intricate colored designs that required several phases and processes to complete. 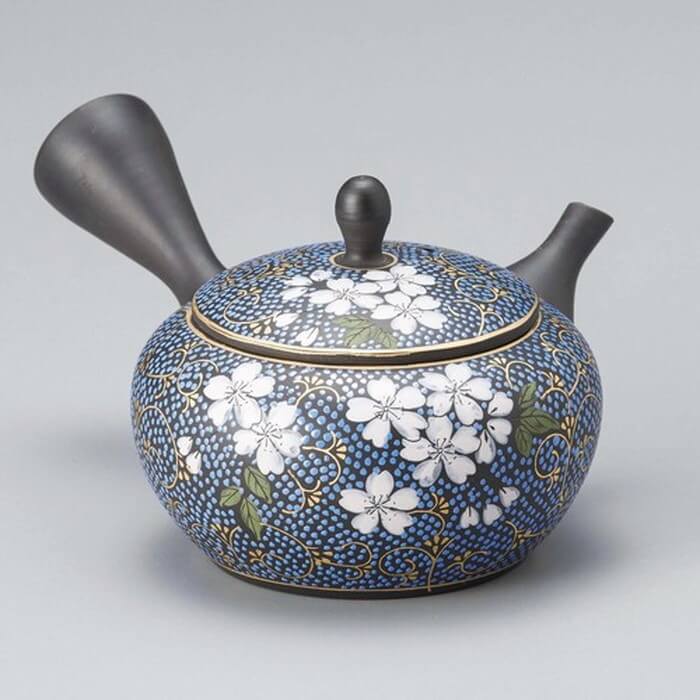 Kutani ware is another well-known Japanese ceramic that is most distinctly known for its striking color glazes. Originating in Kaga (Ishikawa Prefecture), Kutani ware is characterized by its stunning depictions of nature and its five-color palette of green, red, yellow, purple, and Prussian blue. These are commonly referred to as the "five Kutani colors", or the Kutani gosai.

Developed during the Edo period in 1655, Kutani ware was originally inspired by ceramic crafting techniques from Arita. This can be seen in the similarities of color technique and elaborate decorative design. Eventually, in the 19th century, many styles of Kutani ware emerged, including yoshidayafu, iidayafu, shozafu, and eirakufu. 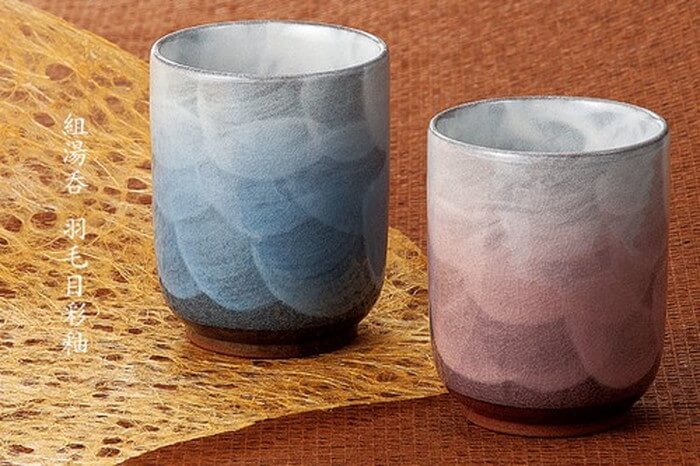 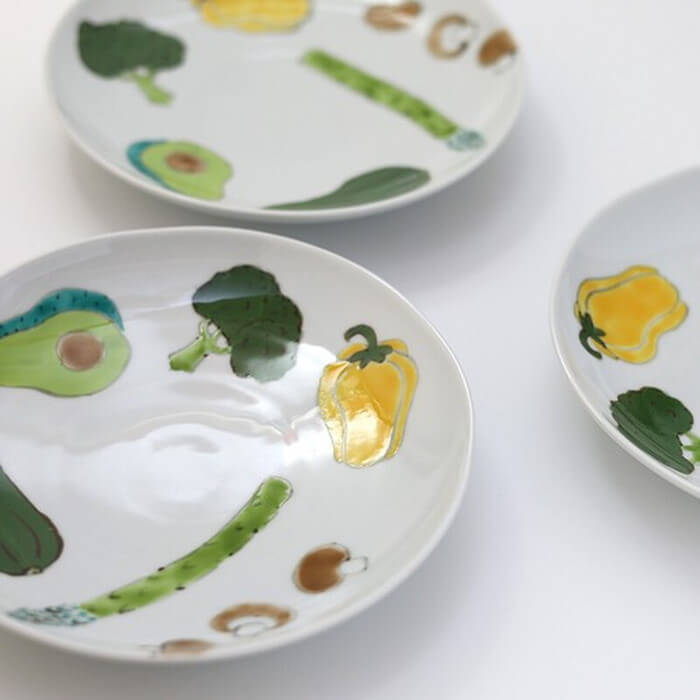 The ceramic style is known for its bright and colorful designs, characteristic of a blue underglaze and gold, black, and red outlines. Imari ware may also have other colors in the overglaze, resulting in intricate and striking designs. 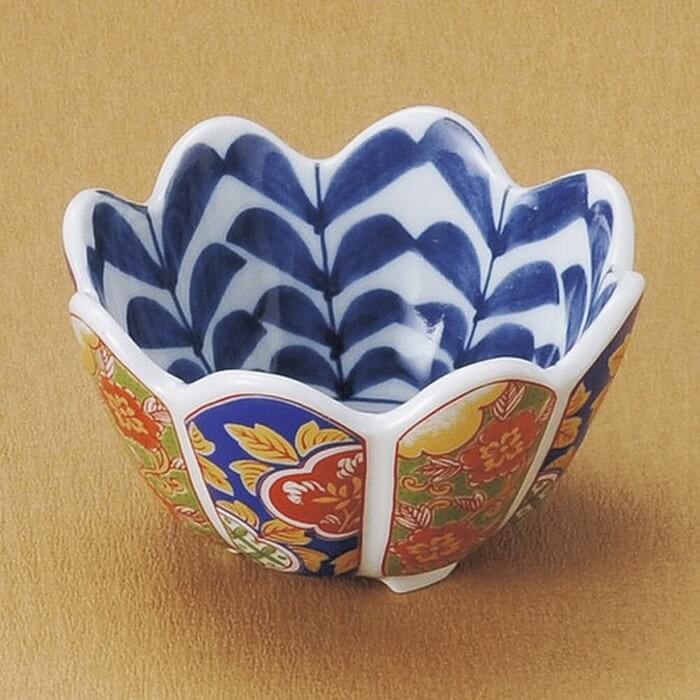 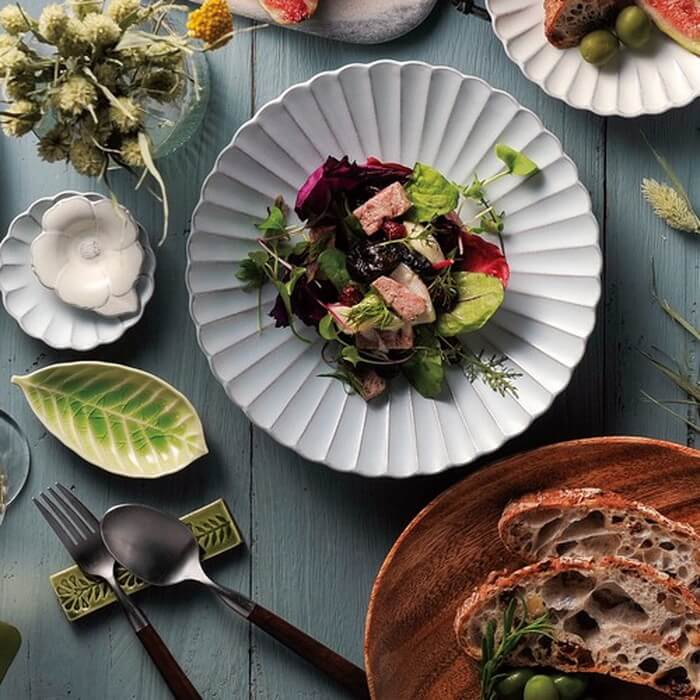 Seto, also known as the town of Setomono, is known today as the capital of Japanese ceramics. The high-quality clays abundant in Seto are low in iron, making them ideal for creating different decorative designs and glazes.

Dating back to as far as the 8th century, Seto ware has been evolving over time and has gained a place in Japanese tea culture. Along with Mino ware ceramics, Seto ware pottery is another key style of Japanese tea pieces, which include tenmoku (brown/black-glazed tea bowls) and chaire (teapots/containers).

Today, Seto ware encompasses various ceramics, including sometsuke (white and blue cobalt) and hongyō ware (stoneware). With a wide variety of kilns, Seto continues to provide the world with a diverse selection of Japanese pottery backed by over 1000 years of history. Kiyomizu ware, also known as Kyo-ware, is a style native to Kyoto. While Kyo-ware refers to all pottery from Kyoto, Kiyomizu ware specifically refers to the pottery sold near the Kiyomizu Temple.

Kiyomizu ware is hand-crafted in a sophisticated and lengthy 9-step process that preserves the traditional techniques. The style tends to depict the four seasons of Kyoto, baking the clay t least once before decorating. 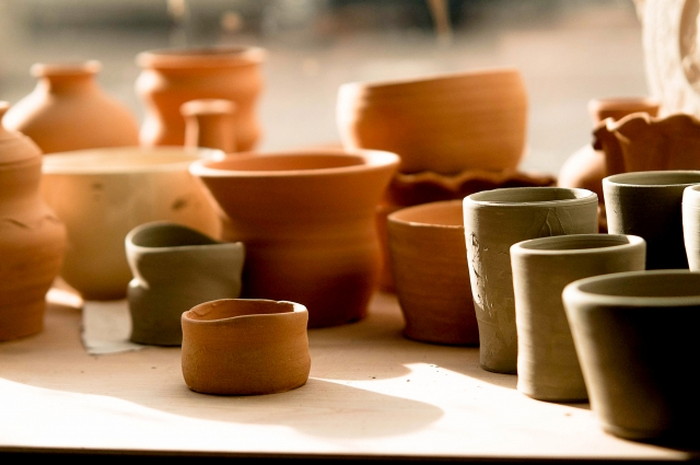 Pottery can be made from various mineral clays, including porcelain clay. It has two types, including uranium and no glaze. The firing temperature is generally around 800°C-1200°C degrees. The clay is sintered and is no longer broken down by the water. But the porosity and water absorption rate are high.

In addition, Japan divides the "Earthenware" from the pottery. But in China, they are collectively referred to as pottery. Earthenware has good water absorption and fire resistance and is ideal for cooking and storing containers. The red pottery, ancient painted pottery of China, and the Jomon Pottery, Yayoi Pottery of Japan are all representatives of earthenware. The coarse soil used to make Shiragaki ware is highly fire-resistant, resulting in a gorgeous pink, scarlet, and brown undertones. This pottery style is also known to be thicker, making it ideal for creating larger pieces. Shigaraki ware often has a rusty glaze on lower parts that are scorched during the firing process. Developed over 1000 years ago in the city of Tokoname (Aichi Prefecture), Tokoname ware is another craft that comes from the Six Ancient Kilns of Japan. The clay that is used to create this pottery comes from the Chita peninsula, which is located in Tokoname. The high iron percentage in the clay results in gorgeous rust and scarlet colors once fired.

Artisans who specialize in Tokoname ware use ancient techniques, such as hand-twisted casting to create unique pottery designs. One of the most well-known Tokoname ware pieces is the small teapot with a unique handle to easily pour the tea. Developed in Mashiko, in the Tochigi Prefecture, Mashiko ware is a pottery style best known for its thickness and rustic look. Rich in silicic acid and iron, the clay used to make this traditional pottery allows it to be easily shaped and fired at high temperatures. Glazes are often made from iron and stone powder, adding depth to the colors and designs.

Created in the latter part of the Edo period in 1853, Mashiko items were originally produced to be used as simple everyday items, such as water jugs and kitchenware. Eventually, these everyday items evolved into an art form of their own, with many intricate and more simple iterations available today. Shino ware, a type of pottery that was developed in Gifu Prefecture, is named after a well-known tea master, Shino Soshun. Dating back to the Momoyama period (1574-1600), this Japanese pottery style is made using a very fine white potting clay, which is later adorned with varying types of designs. Glazes are typically thick and often include elements inspired by nature.

Shino ware is made at many different popular kilns in Japan, each specializing in its own unique style of Shino. Some have a rose-colored tint underneath the glaze, while others may have a slight gray hue. How to Extend The Life of Your Ceramics

The new ceramic tableware needs to be put into the pot and boiled with flour and boiling water for about 30 minutes. You can use it with long, beautiful, in that way. Because the pottery is less hard than porcelain, so don't use the dishwasher. In addition, the residual moisture must be wiped dry after cleaning.

Explore the Vast World of Ceramics What kind of ceramics do you like most? Actually, we are exhibiting at the Nagoya Table Top Show, which is held twice a year. The author and his team led three groups of members from Taiwan to the venue to make purchases. At the Nagoya Tabletop Show, every year, all the vendors exhibit their new and unpublished products. If you are interested, please check this article too!